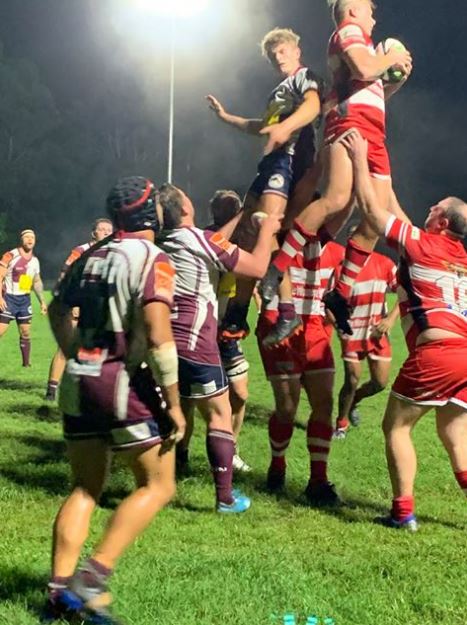 In what was a heavy track on friday night, a tough contest ensued between Nambour Toads and the Noosa Dolphins in the Sunshine Coast Reserve Grade Rugby Union competition. The game started in a frenetic pace of which some ill-discipline by the Toads piggybacked the Noosa Dolphins into redzone territory. Noosa was able to convert this pressure with a quick snipe from their halfback at the base of a scrum to go up 7-0. Both teams had trouble at lineout time and from this, the hits in the midfield started to heat up. In these physical exchanges, the Toads lost Michael Unie to a yellow card for foul play. After some building and continuity, the Toads were able to make their way downfield and take 3 points from repeated Noosa infringements.

The second half did not start well for Nambour as Noosa was able to exploit a couple of tackles that slipped off in the wet weather and went ahead 14-3. Thanks to a deft kick behind the line Nambour was able to peg the deficit and score in the corner creating a scoreline of 14-8. From here the setpiece battle was a little bit all over the place, which allowed Noosa to move up the field and unfortunately score in the corner to create a margin of 19-8. As the game descended into a forwards battle with some brutal hits in the midfield, Nambour gained some forward ascendency and began a sustained attacked on the Noosa tryline with the forwards. Unfortunately lack of execution at maul time and in tight, Noosa was able to repel the attack and take the ball back up the end of the field. A late try to Noosa in the corner took the scoreline to 24-8, of which did not probably reflect the closeness of the battle. We thank Noosa for their spirit during and after the game of which many of their players joined us upstairs for some well earned refreshments and light meals. We look forward to seeing you later in the season!

A special shoutout to the following players for receiving awards.

As the ever-evolving situation continues to occur across rugby union and the community as a whole, Nambour Rugby is taking its direction from the respective union directions including the SCRU and QRU. We will continue to monitor and update the situation as more information comes to hand. During this time we are continuing as business as usual with normal training times and preparation for our next game against Caboolture on Friday 7:30pm at Toad Manor. Soon as anything changes we will update all Toad members and supporters asap through our socials.

We were proud to host a come and try rugby series of clinics over the past 3 Wednesdays, these were very successful and show the passion for Rugby Union in the local community is strong. From this, we are excited to announce some of our first junior teams taking part in the Sunshine coast junior rugby union competitions for the upcoming season ahead. There is still time to register your child for the season ahead, please get in touch via the contact us forms or facebook!