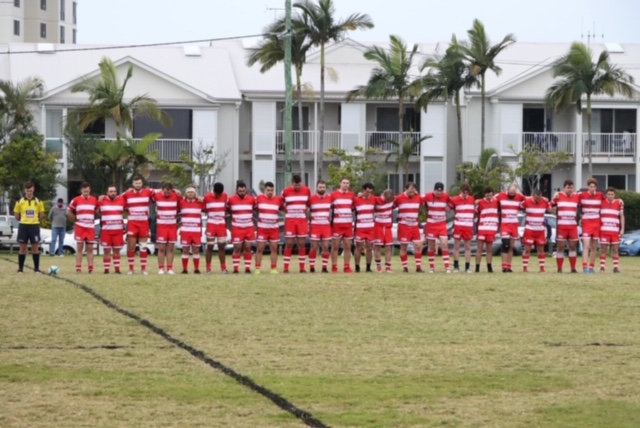 Round 1 finally arrived on Saturday down at Maroochydore where the Senior Reserve Grade side took on Noosa Dolphins. It was a great game with some strong physical exchanges throughout the game.  A minutes silence was observed by both teams to honour Piripi Preston who tragically passed away recently, black armbands were also worn as well as the number 13 jersey has been retired for the whole season in his Honour.

The game started fast and physical with some big shots occurring across the midfield, Noosa managed to retain the ball for long periods throughout the early exchanges with Nambour absorbing a lot of pressure. Some notable big tackling occuring from Man of Steel for the week Tommy J as well as Jordie Tukuniu and Greg Pelka. After some ill discipline Noosa was able to convert pressure into points and went ahead 5-0.

Noosa continued to press throughout the first half and was camped inside the Nambour 22 for 50-60% of the half, a quick turnover and run away from Jake harris could have turned the half around but he was run down. It was another example of Nambour absorbing pressure and attempting to counter, that relieved some pressure but the ball quickly moved back to the Nambour half.

The set piece was strong and dominant even considering after a yellow card to Greg Pelka and the Noosa openside flanker. The Nambour team managed to assert dominance at scrum time and managed to gain a tight head after holding Noosa up over the line. This showed the fighting spirit the club is known for and willingness to commit in defence when backs are to the wall.

Noosa managed to convert the pressure late in the first half to another try converted to go into half time 12-0. In the second half Noosa came out and once again built sustained pressure inside the Nambour 22, of which they were held up twice and repelled consistently. After 20 mins camped inside the Nambour 40m zone, Noosa took a penalty which increased the lead to 15-0. This was a perfect example of Noosa respecting the sound defence of the Nambour team and realising the defence would not be broken easily.

From here Nambour started to retain more ball and looked to close out the game for 70 mins, this showed evidence of the hardwork at training and never say die attitude of the club.

This resulted in a cracking try where Conor Rogers our young halfback broke 3 guys ankles on the way to a chip kick for Jake Harris to score in the corner. This rounded out the game to a 15-5 scoreline and an impressive second half where Nambour won it 5-3. The game showed some huge committment in defence and attitude to not relent to continued and sustained Noosa pressure. Noosa was able to impose their game plan successfully in ball retention and it showed in possession and territory stats that heavily favoured them. It was great to see such a strong second half performance especially considering 5 of the Nambour 23 were of colts age who really took up the fight hard to more older seasoned players. There was a lot of positives out of the performance including a dominant set piece as well as linespeed and attitude in defence.

The team looks forward to a short trip down the bruce to Caboolture to take them on Friday Night at 7:30pm